Clematis growing on a trellis

Vines include a large and varied group of plants. Vines include all kinds of climbing plants and also certain shrubs with long flexible shoots that may be trained to serve as vines.

Outdoors vines are used to clothe porches, trellises, arbors, pergolas, and posts, to clamber up old tree trunks or cover the bare ground beneath, to sprawl over rocks and to cover steep banks.

Indoors, in a greenhouse, solarium, or sunroom, vines are useful to drape pillars and roof rafters, to cover walls, and in general to add a floral and foliage effect. Some are also used to embellish windows and porch boxes and hanging baskets in or around the dwelling.

Vines have developed different methods of supporting their stems. Some produce adventitious roots along one side of the stem, which serves to fix and hold them to such objects as a wall or tree. English ivy and trumpet vines are good examples of this group.

Some vines cling by means of tendrils which are often twisted like a spiral spring so as to combine security with a certain amount of flexibility or “give.” Gourds, grapes, and peas climb this way. The Boston ivy attaches itself by means of disks at the end of the tendrils.

Some vines are supported by their leaves; the stems or petioles being sensitive to contact with a supporting object, curl around it. Clematis is notable in this ground.

Many vines have stems which twine about a support, and it has long been of interest that not all twine in the same direction. The hop, for example, turns or winds to the right or clockwise, while the morning-glory turns to the left or counterclockwise.

With the exception of the stem-rooting type, vines used to cover walls will require some kind of support attached to the wall. Twine or wire and wall nails or vine-eyes are used in some places. Modified forms of this idea are found in wire clips cemented to the wall surface, in-wall nails with pliable tips to bend over the stems, and in stapes driven into wooden plugs in turn driven into drilled holes to which stems are tied.

Other means of supporting vines are stout wires run through screw eyes or vine eyes projecting a few inches from the wall to afford a good means of support in many cases. For porches and against walls that have to be painted from time to time a good plan is to construct a wooden or pipe frame with wire cross strands or wire-netting and attach it to the wall by means of hooks. The entire section can be unhooked, lowered to the ground, and laid there out of the way of painters and without damage to the vines.

Various forms of wood lattice-work may best serve the purpose under certain conditions. To form a screen away from buildings, posts with wires threaded through them may be used, and for individual vines out in the open cedar posts with the branch stubs left on is a good solution.

In place of a low fence or along a walk or drive, vines can be grown on chains or heavy wires looped in long cures between wood, metal, or masonry pots.

An important task in the growing of vines is the proper preparation of the planting location. Most vines are vigorous growers and can be expected to remain in the same place for many years. If simply stuck in the ground without regard for soil quality and the condition, most can grow stunted or fall victim to insects or disease.

Break up the soil at least 2 feet deep and over an area of 3 feet or more across for each plant. Entirely replace the soil with a good loam if need be and always enrich it with aged compost or leafmold. Near a building watch out for buried mortar or construction debris that can interfere with both moisture and food supply for the plants.

As a general rule, the best time to plant vines is in spring. After planting it is a good plant to cut the plants back severely so as to induce good basal growth. Watch the young shoots and see that they are properly secured from the start.

Vines close to a wall are likely to suffer from dryness of the roots; thorough soakings from time to time will ensure root growth.

Both newly planted and established vines appreciate a mulch of aged compost and feed with a good organic complete fertilizer now and again when growth is active.

Due consideration should be given to the space to be covered when selecting kinds of vines. A vigorous grower planted where there is only space for one of moderate growth will result in a lot of cutting back which detracts from the natural beauty of the plant.

Some pruning, of course, is necessary but as always the pruning shears should be used with discretion and good judgment.

Vines that flower early should be looked over right after flowering; the laterals should be shortened and perhaps some of the old, main shoots removed to make way for young ones.

Vines which flower on the shoots of the current season’s growth are properly pruned in spring just before new growth starts. It is sometimes advisable to give old plants such as English ivy a hard shearing, and if this is done in spring the stem will soon be clothed again with new leaves.

Do not allow vines to cover up good architectural features, but by all means, let them conceal poor ones. Select vines with considerations for their habits.

Vines for Arbors and Trellises 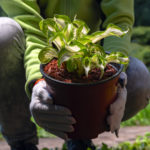