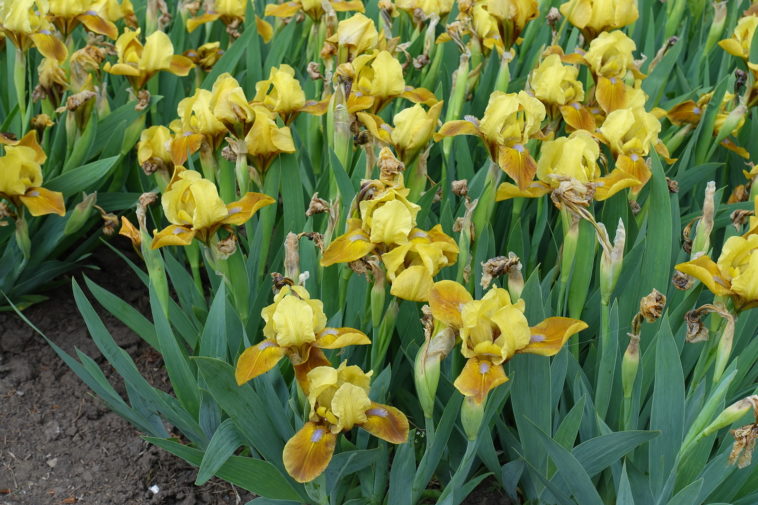 Irises are the standouts of the spring garden. There are more than 300 species of irises. To risk oversimplifying this remarkably diverse group of plants: there are two types of iris flowers—bearded and beardless.

Tall bearded irises are widely grown and perhaps the most popular. They have showy flowers on branching stems from 28 to 48 inches (.7-1.2m) tall. The “beard” of the bearded iris extends below three upright and three horizontal petals. Bearded iris flowers come in every color except green and scarlet red.

Beardless irises distinguish themselves from bearded species by appearing “beardless”—there is no petal that falls below the horizontal petals as seen in bearded irises. There are five hybrid groups of beardless irises—Japanese irises, Louisiana irises, Pacific Coast irises, Siberian irises, and Spuria irises.

Beardless irises are widely planted in mass across landscapes.

Most irises grow from rhizomes; some grow from bulbs. All have straight, tall, sword-like grassy leaves.

The requirements for growing an iris are simple–sun and good drainage. The plants grow well in almost any soil. They are less susceptible to disease in soils of moderate fertility.

Iris should not be crowded with other plants. It needs air and sunshine, but half a day of full sun will suffice.

Get to Know Iris

Where to Plant Iris

When to Plant Iris

How to Water and Feed Iris

Growing Iris as a Houseplant

Q: How can I use irises in the garden?

A: There are many ways to feature irises in the garden. Include them in a perennial border or use them as single accents by themselves. Plant a clump of irises among evergreens. Interplant them with daylilies.

Q: What are the bloom times of various irises?

Q: Which irises bloom in shade?

A: Certain wild species of irises will bloom in partial shade: Iris cristta, I. gracilipes, I. verna, and I. foetidissima. Most irises prefer full sun.

Q: What is the best soil for irises?

Q: When is the best time to plant bearded irises?

A: Plant bearded irises after flowering in early to mid-summer. This will give them a long period of recuperation before blooming again the next year. They can also be planted in spring and fall. Plant rhizomes level with the surface in well-drained, sunny beds.

Q: When should I plant Japanese irises?

A: Plant Japanese irises in early spring before growth starts or in late summer. Set the crowns 2 inches below the surface.

Q: How do I plant Dutch, English, and Spanish irises?

A: Plant the bulbs four to five inches deep in mid to late autumn.

Q: What is the best spacing for irises?

Q: How do I water irises?

A: Bearded irises usually need no watering, Japanese, Siberian, and other beardless types need plenty of moisture until they finish flowering. Cultivate them shallowly keeping the surface loose and free of weeds.

Q: How often should I transplant irises?

A: Transplant irises whenever they become crowded and the rhizomes are growing over one another–about every three years. Avoid moving bearded irises until after they bloom. Japanese and Siberian irises will bloom after being moved.

Q: How do I treat bearded irises after they bloom?

A: Remove the spent flower stalks immediately. Keep all the dead foliage cleaned off.

Q: How do I divide irises?

A: After bearded irises finish flowering, cut the leaves back halfway, lift the clumps, then cut the rhizomes into pieces with a sharp knife so that each has one strong fan of leaves. Division should be disease free. Japanese iris clumps are best divided with a heavy-bladed knife. Cut the leaves halfway back and then chop the rootstock into pieces each with three or four growths. Save only the vigorous portions.

Q: Why do my irises fail to bloom?

A: There are a few reasons irises fail to bloom: too much shade, alkaline soil, dry soil, waterlogged soil, and overcrowding. The more sun the better; divide plants every one to two years.

How to Divide Irises 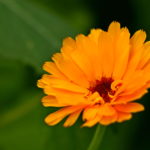 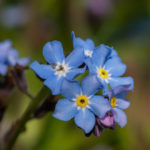