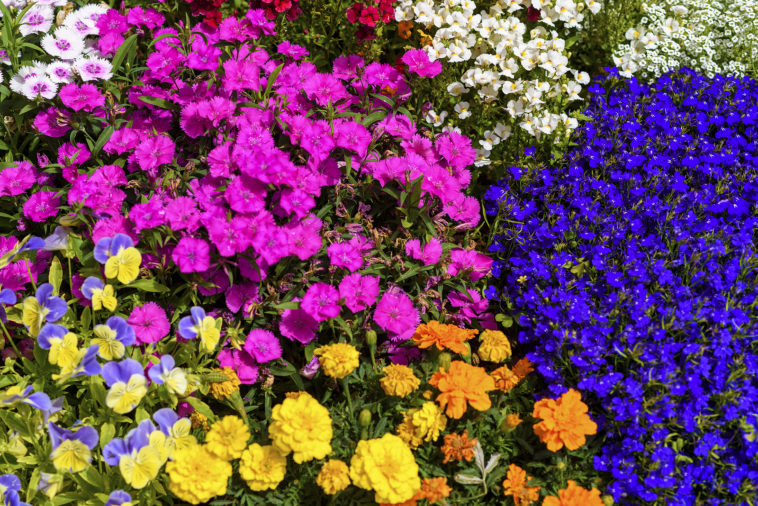 Bedding is a garden term used to denote the massing of plants for showy flower or foliage effects. Bedding is a style that is commonly formal and geometric in design.

Many of the plants best suited to bedding are tender and their period of effectiveness comparatively short. Nonetheless, there are certain formal areas in parks in combination with certain types of architecture where bedding is very fitting.

Spring bedding gives showy floral effects early in the season and features such hardy bulbs as crocus, hyacinth, narcissus, and tulips of both early and late-flowering groups. Other plants used in spring bedding are aubrietia, alyssum, Arabis, Bellis, myosotis, polyanthus primulas, and pansies. An example of a common spring bedding combination is to carpet a bed of yellow tulips with baby blue forget-me-nots.

As soon as spring bed slips out of bloom plants are usually removed and replace with others which have been brought along in a greenhouse for summer display. Where bulbs alone are used they are commonly planted over with annuals transplanted out or sown in place.

Summer bedding plants for display are set out as soon as danger of frost is past. This group combines tender perennials propagated from cutting and perennials and annuals raised from seed won early in the year indoors or in hotbeds.

All foliage summer bedding plants include coleus with leaves in a variety of colors, Dusty Miller (Centaurea cineraria and Centaurea gymnocarpa), and Senecio leucostachys—the last three are gray. Forms of Chrysanthemum parthenium, commonly called Golden Feather or Feverfew, are featured for their finely cut golden leaves.

Subtropical bedding applies to the arrangement of tropical plants in beds or groups outdoors for the summer months. Bold and exotic effects can be obtained for a short season; for best results, a sheltered location is best.

Ferns, crotons, dracaenas, abutilons, acalyphas, cycads, and palms are often featured in subtropical bedding. In regions where these plants are commonly displayed indoors or in greenhouses, these plants can be set outdoors in their pots, the pots set in the ground; thus they are easily returned under glass with the approach of cold weather.

Other subtropical plants for summer outdoor display include amaranthus, Albizzia, Eucalyptus, Grevillea, melianthus, nicotiana, Ricinus, and various species of solanum. Cannas are included in this group with their exotic flower and foliage displays. Grasses for summer display include Pennisetum and miscanthus.

Carpet bedding is the elaborate, geometrical layout of beds and intricate design of the plant arrangements sometimes even featuring pictures. Carpet bedding was once popular in the home garden but now is seen mostly in parks and other public places.

Carpet bedding is the most unnatural of bedding design; it calls for a high degree of technical skill in design, selection of plant material, and continuous attention in trimming and pinching to keep the pattern well defined. The color effects in this style of planting are often obtained from foliage rather than from flowers.

Planting Bedding in the Garden

To obtain the best results from bedding plants you must give preparation of the soil considered attention. Deep cultivation and the addition of aged compost or commercial organic planting mix is the best insurance against drought. Prepare the soil 12 to 18 inches deep.

Good draining is essential and if the subsoil is heavy (clay) it can be improved with the addition of leafmold and some sand. Beds that are vacant over winter will be improved by double digging in the fall; in fall, aged manure should be worked in and the surface left rough until planting time. The action of frost will render it more friable.

Commonly the first planting will be done in early spring. First planted are often pansies, daisies, and forget-me-nots that have wintered over in frames. Later these will be replaced by more tender plants for summer display that has been started in greenhouses or indoors until frost is safely past. Plants started undercover should be hardened off before planting.

It is best to first layout the plants in position then make any necessary rearrangements and then finally begin to plant. Work from the center of the area out to the edges. In most cases, the planting shows to best advantage when the center of the bed is somewhat raised. After planting give the bed a good soaking to settle plants in place. Water when plants need it and give the soil a soaking but avoid overhead watering as possible.

Tidiness means a good deal in the success of a bedding scheme. Keep the soil lightly cultivate as long as it can be done without danger of injuring the plants. Pick off withered leaves and flowers as they appear. Pinch back wayward shoots as necessary from time to time, especially if the design is formal. Neatly kept edges add much to an attractive appearance.

When frost approaches at the end of the season, cuttings of tender perennials can be taken as a source of future stock, or some old plants may be lifted and potted up to provide cuttings at a later date.

When the summer display is finally over, the beds should be well dug and either planted to hardy bulbs for spring effects or left in a rough state until planting time the following season. 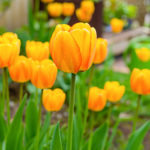 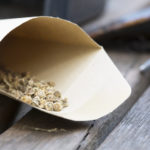 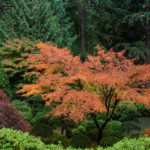 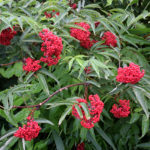